Age Seven: Burying the Evidence of a Crime

String Theory is a set of concepts in physics in which matter is comprised of tiny “strings” with a width of zero. The physics hierarchy is as follows. Atoms are made up of subatomic particles including neutrons, protons, and electrons. Neutrons and protons in turn are made up of quarks (see entry for Quarks). In string theory, each quark is a string.

There are two types of strings: open (left) and closed (right)

Each string has a property called its vibrational state. It should be noted that such terms as “vibration” and “color” often have different meanings in theories of physics than are commonly understood in everyday life. The “vibrational state” of a string, like the “color” of a quark, are just names for different states. String theory provides a set of rules for how strings interact with each other based on these properties.

String theory attempts to unify two very different foundations of twentieth century physics. One is Einstein’s general theory of relativity, which explains gravity as a result of curvatures in space and time. The second is quantum mechanics, which describes the interaction of particles based on information states and probabilities (although there are theories of quantum mechanics that are not probabilistic, which Danielle will subsequently explore). Most experimental results in physics can be explained by one theory or the other, but the two theories have appeared to be incompatible with each other. Unifying them has been a major goal of physics for the past half century. A theory that would unite these two theories has sometimes been referred to as a “theory of everything.”

One particular string vibrational state makes a string a “graviton,” which is a particle that in theory carries the gravitational force. This is one way in which string theory is attempting to unify Einstein’s general theory of relativity and quantum mechanics.

There are two fundamental problems with (one might regard these as challenges to) string theory. One is that no one has provided any experimental evidence that supports the theory. Moreover, a way that such evidence could be provided has not yet been devised. Some scientists have gone on to conclude that string theory is inherently not testable. For example, physicist Peter Woit wrote in his 2007 book Not Even Wrong:

Woit is basically saying that if the theory is inherently not testable then it does not qualify as science, but rather as philosophy or even pseudo-science. In his book, Woit puts string theory in the pseudo-science category.

The other problem is that there is no one string theory. Counts of the number of different possible string theories are as high as 10500. Another theory (also arguably untestable) that builds on this observation is that there exists a “multiverse,” which is a large number of different universes, also possibly as high as 10500. In this theory, each of these different universes has a different string theory. The vast majority of these do not allow for such things as atoms and molecules to exist so that evolution is not possible. In what is referred to as the “anthropic principles,” it is only in a universe that does allow for the coding of information in such objects as atoms and molecules that conscious and intelligent entities such as humans could evolve that are capable of discussing such matters. Thus we must be living in such a universe or we would not be here talking about it.

The other interesting property of string theory is that the strings exist in more than the three spatial dimensions we are used to. In versions of string theory known as “M-theory,” there are up to 11 dimensions. A version called “Bosonic String Theory” has 26 dimensions. In “Superstring” theory, there are 10. In some of these theories, the other dimensions are tightly “curled,” such that these other dimensions are not observable beyond the extremely small scale of string theory itself. For an intuition as to what this means, imagine a garden hose seen from far away. It would look like a string, essentially a curved line. However, if you look at it from up close it becomes apparent that there is another tightly curled dimension.

The aspects of string theory and quantum mechanics that have attracted the attention of Danielle at age seven and older are the dimensions beyond the three we know about, the testability of properties and events at the quantum-string scale, and the idea that outcomes may be determined by an irreducible randomness.

In the alternative reality of Danielle: Chronicles of a Superheroine, seven-year-old Danielle explains string theory to her sister Claire and some ideas on how to advance it.

As described in the previous entry, string theory envisions spaces with more than three dimensions (as many as 26 in one version). It would be possible, therefore, to have n-dimensional manifolds where n is more than two or three.

In the alternative reality of Danielle: Chronicles of a Superheroine, seven-year-old Danielle is reading Cheng Liu’s theory that calls for two- and three-dimensional manifolds. She will go on to theorize manifolds of more than three dimensions. These are both expansions of string theory.

The CMA (Country Music Association) Music Festival is a four-day festival of country music organized by the Country Music Association held each year in June in Nashville, Tennessee. In 2011 attendance was estimated at 250,000 people. It started in 1972 and was called Fan Fair. Performers at the 1972 Fan Fair included Loretta Lynn, Dolly Parton, Minnie Pearl, and Ernest Tubb.

In the alternative reality of Danielle: Chronicles of a Superheroine, seven-year-old Danielle wants to debut her musical talent at CMA Fest.

Alabama was deeply influential on the development of the blues and of country music. W.C. Handy (1873–1958), regarded by many as the “Father of the Blues,” was born and raised in Florence, Alabama. Since 1982, an annual festival called the W.C. Handy Music Festival is held “to preserve, present, and promote the musical heritage of northwest Alabama.” 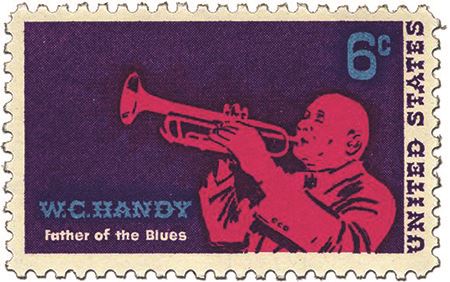 Another influential Alabama blues musician, Johnny Shines (1915–1992) moved to Holt, Alabama in 1969 where he lived and sang until his death in 1992 in Tuscaloosa, Alabama. Later that year he was inducted into the Blues Hall of Fame. 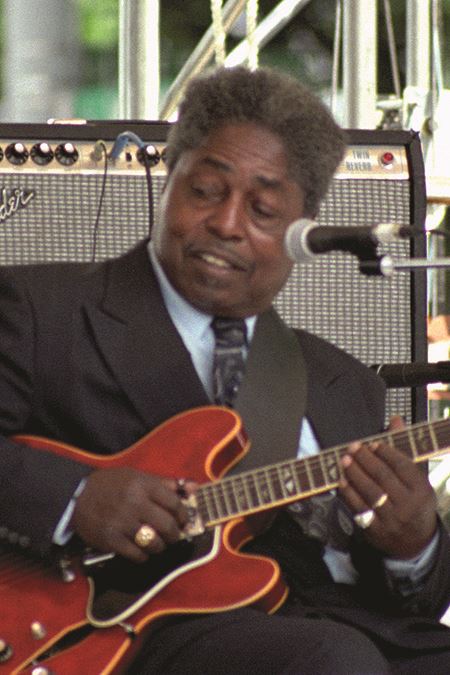 In the alternative reality of Danielle: Chronicles of a Superheroine, Alabama blues is one of Danielle’s musical influences.

Despite a public performing, singing, and recording career of only four years, Jimi Hendrix (1942–1970) is regarded as perhaps the most influential electric guitarist of all time. The Rock and Roll Hall of Fame calls him “arguably the greatest instrumentalist in the history of rock music.”

Influenced by American rock and roll and electric blues, he started playing the guitar when he was 16. After a brief enlistment in the US Army, he joined the backup band to the Isley Brothers, and later backed for Little Richard. He attracted the interest of Chas Chandler, the bassist of the Animals, who became his first manager. 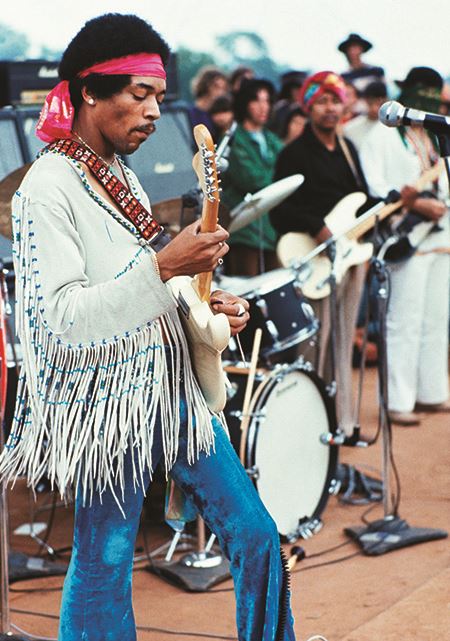 Jimi Hendrix on August 18, 1969, as he began his performance of “The Star-Spangled Banner” at the Woodstock Music Festival, where he was one of the headline acts

A few months after meeting Chandler, Hendrix and his band, the Jimi Hendrix Experience, played the Bag O’Nails, a nightclub in London. Eric Clapton, John Lennon, Paul McCartney, Jeff Beck, Pete Townshend, Brian Jones, Mick Jagger, and Kevin Ayers were in the audience. Ayers wrote about the experience, “All the stars were there, and I heard serious comments, you know ‘shit,’ ‘Jesus,’ ‘damn,’ and other words worse than that.” The British weekly music newspaper wrote about Hendrix’ performance that evening with the headline “Mr. Phenomenon,” “Now hear this … we predict that Hendrix is going to whirl around the business like a tornado.” Within months, Hendrix had three top 10 UK hits, “Hey, Joe,” “Purple Haze,” and “The Wind Cries Mary.”

Hendrix became famous for pioneering and mastering sounds that electric guitarists had previously avoided, such as overdriving amplifiers with high gain and shaping guitar amplifier distortion and feedback.

Hendrix died on September 17, 1970 after spending most of the day with his girlfriend Monika Dannemann. She later revealed that he had consumed nine of her prescribed Vesparax sleeping pills, which is 18 times the prescribed dosage. The coroner’s report said that as a result he had choked on his own vomit.

In the alternative reality of Danielle: Chronicles of a Superheroine, Jimi Hendrix is another musical influence of Danielle’s.

Ribavirin is a popular antiviral drug. It inhibits the synthesis of RNA which viruses need to reproduce. How it does this is still not understood.

It is commonly used to treat hepatitis C and a variety of hemorrhagic fevers. It is on the World Health Organization’s List of Essential Medicines.

In the alternative reality of Danielle: Chronicles of a Superheroine, seven-year-old Danielle acquires Ribavirin, and it is one of the drugs she brings to Sempala to treat her friend Amu because she knows that it is regarded as an effective broad-spectrum drug used against many viruses found in swampy areas, such as Amu’s village of Sempala.

How You Can Be a Danielle and promote world health.