Age Three: A Pig in Mud

In the alternative reality of Danielle: Chronicles of a Superheroine, three-year-old Danielle explains how orbits work to her teacher and the older kids in her How the Universe Works class. 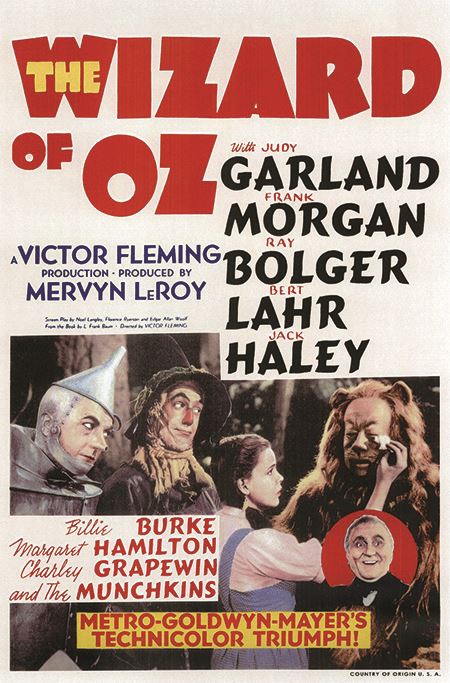 The original 1939 movie poster for The Wizard of Oz

The 1939 movie musical The Wizard of Oz (based on the 1900 novel The Wonderful Wizard of Oz by L. Frank Baum) has become one of the most beloved American movies of all time. Dorothy (played by Judy Garland) and her dog Toto are caught in a tornado and end up in a magical land called Oz. She follows the Yellow Brick Road where she meets the Scarecrow (played by Ray Bolger) who wants a brain, the Tin Man (played by Jack Haley) who wants a heart, and the Cowardly Lion (played by Bert Lahr) who wants courage. For her part, Dorothy just wants to go back to Kansas.

The four of them, along with Toto, travel along the Yellow Brick Road to the Emerald City where they hope that the legendary Wizard of Oz will solve their problems. Toto reveals the Wizard’s ordinary humanity, but the Wizard does help the four fellow travelers after all.

After they defeat the Wicked Witch, Glinda explains to Dorothy that she has had the ability to return to Kansas all along just by clicking the heels of her ruby slippers. “You’ve always had the power my dear,” Glinda the Good Witch explains to Dorothy. “You just had to learn it for yourself.”

In the alternative reality of Danielle: Chronicles of a Superheroine, three-year-old Danielle explains to the class that the redness of Dorothy’s shoes symbolizes Dorothy’s coming of age, and thereby the ability to make her own decisions.

The id, ego, and superego are the three fundamental parts of Sigmund Freud’s (1856–1939) model of the self first discussed in his 1920 book Beyond the Pleasure Principle and further elaborated on in his 1923 book The Ego and the Id.

These three components of the psyche do not correspond to physical structures in the brain, but are theoretical constructs responsible for how a person makes decisions. Freud is describing a person’s mind analogously to different factions in a society. Different people, like different societies, will negotiate varied balances between these blocs.

The idea of the mind as a society was picked up by artificial intelligence pioneer Marvin Minsky (born in 1927) in his 1986 book The Society of Mind, in which he formalizes a theory in which a person’s mind is comprised of competing factions.

In this troika, the id, according to Freud, comprises our instinctual desires, which derive from our physical needs, wants, and desires, including, in particular, our sexual and aggressive drives. According to Freud, these drives are stronger and more influential than people are willing or able to acknowledge.

A key part of the id is the libido which seeks immediate gratification. The libido acts by way of the pleasure principle, which includes avoiding displeasure (such as pain) and seeking pleasure.

Another key idea that Freud articulated is that of the “unconscious,” the part of the mind that we are not aware of without reflection. The idea that the processes underlying our decisions were largely not conscious was a revelation in the early twentieth century. The id is entirely in the unconscious, and is the only part of the mind that is fully active at birth and in an infant.

Freud wrote in 1933 in his New Introductory Lectures on Psychoanalysis:

The id is the dark, inaccessible part of our personality, what little we know of it we have learned from our study of the dreamwork and of course the construction of neurotic symptoms, and most of that is of a negative character and can be described only as a contrast to the ego. We approach the id with analogies: we call it a chaos, a cauldron full of seething excitations. … It is filled with energy reaching it from the instincts, but it has no organization, produces no collective will, but only a striving to bring about the satisfaction of the instinctual needs subject to the observance of the pleasure principle.”

In the alternative reality of Danielle, Chronicles of a Superheroine, the Tin Man wants a heart to seek love and gratification, so three-year-old Danielle explains that the Tin Man is the symbol of the id.

In Freud’s model of the three fundamental parts of the self, the super-ego is the internalization of social and cultural rules as taught to us by our parents and teachers, and people whom we regard as models for our behavior. A key part of the super-ego is the “conscience,” which seeks to tame the impulsive needs of the id.

The super-ego works largely to counteract the id. Freud wrote in 1923 in The Ego and the Id:

In the alternative reality of Danielle: Chronicles of a Superheroine, the Lion wants courage, which will provide the will to overcome immediate gratification, so three-year-old Danielle explains that the Lion is the symbol of the super-ego.

The ego attempts to satisfy the id’s desires while “mediating between id and reality” (from Freud’s New Introductory Lectures on Psycho-Analysis) and to avoid the punishments of the super-ego which can inflict feelings of guilt, anxiety and inferiority.

As Freud explains in his essay The Ego and the Id:

Conscious awareness resides in the ego, although not all of the functioning of the ego is conscious.

Freud initially used the term ego to refer to a sense of self, but later clarified it to refer to thinking in general, including such functions as judging, planning, remembering, and developing strategies and tactics.

In my own model of the brain (as articulated in my 2012 book How to Create a Mind), the ego resides in the neocortex (meaning “new rind”) which is a thin structure around the “old brain”. The neocortex is where we do our thinking and reasoning. Only mammals have a neocortex. The old brain (around which the neocortex is wrapped) is responsible for our drives and roughly corresponds to the id.

Since Freud’s introduction of the concept, “ego” is often equated with self-esteem and self-worth, and can take on negative connotations. For example, having a “big ego” is generally a criticism, and the term “egotist” is regarded as pejorative. In Freud’s conception, however, the ego is a crucial and needed part of the self to be successful. Indeed it is the closest concept in Freud’s model to the “self.”

In the alternative reality of Danielle: Chronicles of a Superheroine, the Scarecrow wants a brain, which will provide the thinking to develop the strategies to succeed, so three-year-old Danielle explains that the Scarecrow is the symbol of the ego. Although Freud’s id, super-ego, and ego all reside in the brain, it is ego that is generally equated with “thinking.”